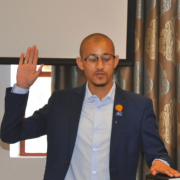 Picture:- Jason White, a PR Councillor for the DA, takes the oath to serve Knysna to the best of his ability. At 23 years old, Jason is the youngest person ever to serve on the Knysna Council. (See full story on page 4 of edition 628)

Whilst the first meeting of Knysna’s newly elected council was a testimony of democracy at work regarding the number of parties represented, it did not provide much hope for smooth-sailing governance of the town over the next five years.

The councillors, some brand new and others seasoned politicians, hit a deadlock on their first decision – that of the election of a Council Speaker, and it seems that next Monday, the fate of Knysna’s Council could well be decided by the toss of a coin.

The inaugural council meeting was held on Monday, 15 November, at the Council Chambers and officiated over by Knysna’s Acting Municipal Manager, Dawie Adonis. On opening the proceedings, Adonis emphasized the importance of this new five-year term in the context of political leadership and stability as well as administrative stability for Knysna

“This five-year term will be a watershed moment to ensure that Knysna Municipality regains its glory day competitiveness as a number one tourist destination within the Garden Route. This Council will be tasked to ensure community cohesion and to establish a strategic plan for Knysna,” he said.

Next, all 21 councillors (eight DA, seven ANC, two each for PA and KIM and one each for EFF and PBI) were ceremonially sworn in by the Municipality’s Legal Services Manager Melony Paulsen. Each swore to uphold the South African Constitution and perform their functions as a member of the Knysna Municipal Council to the best of their ability.

After that, the AMM announced that the election of the council speaker would begin. Politically, the position of Speaker is of exceptional importance, especially when numbers in rival coalitions are even because once the Speaker is in place, if the council reaches a deadlock on any matter, the Speaker automatically has the extra deciding vote. As voting for the positions of Executive Mayor and Deputy Mayor would be next on the agenda – this extra vote wields a lot of power.

The two nominations for the Council Speaker position received from the floor were the ANC’s Ward 3 Councillor Mncedisi Skosana and Julie Anne Lopes, a PR councillor for the DA.

But there was no doubting that deliberations, and indeed negotiations, had begun long before the start of the meeting. By Friday last week, the word on the street was that with eight seats, the DA might take control of the council with the additional votes of the two KIM (Knysna Independent Movement) councillors and the single PBI (Plaaslike Besorgde Inwoners) councillor. But a weekend is a long time in politics, and by Monday, rumblings of a different plan started echoing in the political corridors.

One councillor who may have broken the deadlock was the new EFF councillor Neil Louw, but he made his position clear very early on by announcing that as a ‘disciplined member of the EFF’, he would be abstaining from the vote – as he was awaiting instruction from his party at a national level.

Once the councillors had all returned to chambers, voting was done by ‘secret ballot’, and the count confirmed that each of the two candidates had received ten votes. After that, the AMM had no choice but to adjourn the meeting, as per the Local Government Municipal Structures Act.

The Council is to reconvene on Monday 22 November and once again vote to fill the position of Speaker. If the same outcome occurs – two candidates with equal votes – the act states that “…the person presiding at such meeting must determine by lot who of the two candidates will hold the office for which the election has taken place.” According to the AMM, this will be by the flip of a coin!