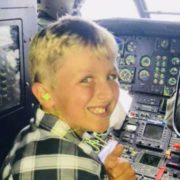 On Friday morning the excitement at Laerskool Sedgefield Primary was palpable as the entire school witnessed a young boy’s dream becoming a reality.
Whilst there’s surely many a lad who would give a year’s pocket money to fly aboard an Air Force chopper – it’s doubtful there are many as passionate about the idea as 9-year-old Liam du Preez. And judging by the size of his smile as he and his classmates boarded the SAAF Oryx Helicopter and took to the skies, the experience was even better than he anticipated.
One could say that helicopters, the Oryx in particular, are in Liam’s blood. His Grandfather Russell du Preez was an Oryx flight engineer who passed away as a result of a helicopter accident in China, four years before Liam was born, and his uncle Mark is also qualified as an Oryx flight engineer, who now flies smaller choppers for the Red Cross Air Mercy Service in Durban.
Single parent Yolande, says that even though Liam grew up pretty much without a father figure, he was ALWAYS besotted by helicopters. So when Oryxes carrying Bambi buckets joined the fight against the Knysna blazes in June last year, he spent a great deal of time on their stoep watching them fly over and waving at the crew on board.
“Then he drew a picture and asked if I could send it to them along with a letter he had written,” said Yolande, “He said he wanted to thank them and tell them they were true heroes.”
She managed to contact Major Nico van Schalkwyk who had been in charge of the aerial firefighting effort – specifically the Oryx choppers, and he kindly invited Liam to meet the Knysna crew and personally hand over his letter to them. Much to the young lad’s delight they took Liam on board a helicopter and explained to him how the water scooping ‘Bambi’ buckets worked.
But it didn’t end there. The Major was so impressed with the well mannered Liam’s eagerness to learn, that he forwarded both letter and sketch to General Etienne de Bod of the South African Air Force (SAAF) in Pretoria.
In turn, the General then contacted the family saying he wished to come with an Oryx chopper and crew to meet the boy at school.
Yolande wasted no time in making arrangements with the school to make the visit a reality. “It was a long wait before it happened – but worth every second,” she told us when the day finally arrived.
The whole school assembled on the field, along with Mayor Eleanore Bouw-Spies, parents and inquisitive locals, to watch the Oryx land and witness a very proud Liam being presented with an SAAF flying cap. Then, after a detailed safety lecture, he and his class were split into groups of eight and taken up for a ride of their lives. This certainly was a dream come true.
“We are extremely grateful and happy that the Air Force and everyone else involved could make this happen for my son and his classmates,” said a very emotional Yolande, “No words can express how much this meant to me and my son.”
There’s no doubt that the SAAF will be getting a few new recruits from Sedgefield in a few years’ time, and one, in particular, will have the honour of continuing the Flight Engineer tradition for the du Preez family.