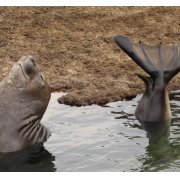 Words and picture by Mark Dixon

If you went down to Gericke’s Point last week, you likely had a big surprise. A young male Southern Elephant seal had hauled up on the western side on Tuesday 10th May. That evening I started receiving messages from locals who had been surprised by their encounter with it.
Southern Elephant seals are the largest true seals and display a remarkable sexual dimorphism, with males capable of reaching 5.9m and weighing in at up to 4000kg, while females weigh between 400kg and 900kg and measure between 2.6 and 3m.
They derive their name from their large size and the inflatable proboscis used to produce loud roars, most commonly during the mating season in early summer. First, males arrive at the breeding grounds on sub-Antarctic islands to establish their territory for a harem consisting of a few dozen females. The females then arrive to give birth to their pups which they nurse for three weeks before returning to the sea to feed. Finally, in late summer, adults return to shore to moult. In a process called a catastrophic moult, both the fur and outer layer of skin are sloughed off.
Watching the seal resting at Gericke’s Point, it was amazing to see it breathe, usually through one nostril at a time. Between breaths, both nostrils would be closed tight, and then he would open one to exhale and inhale before closing it again. Despite resting, he was super aware of his surroundings and frequently scanned them by rolling his large eyes. The eyes of Elephant seals are noticeably large and contain a high density of low-light receptors, which they use to hunt prey at great depth. They can reach depths of 1000m, with the deepest recorded at 2338m, and regularly remain submerged for more than 20 minutes.
After moulting, Elephant seals will return to their hunting grounds along the edge of continental Antarctica, usually alone. However, occasionally vagrants will reach the South African coastline, either due to being caught up in currents or searching for new hunting grounds, with up to 10 sighted in a year.
I was fortunate to be able to observe and film the seal. He had chosen an ideal location to come ashore to rest as it was well shaded for most of the morning. When the sun did reach him, after midday, he would bask for an hour, and then when he got too hot, he would move into the water to cool down before hauling up onto the rocks again. On Wednesday, when the Berg wind started blowing, the high temperatures were too hot for him, and he took to wallowing in a tidal pool to cool off, remaining submerged for 10 to 15 minutes at a time.
Then, on Wednesday, eight days after arriving at Gericke’s Point, he made his way to the water’s edge and slipped away into the open sea. However, his visit did leave a mark on him. Comparing photos from his arrival with ones taken moments before his departure, I saw a new gash on his lower right lip, a distinctive identification marking should he ever revisit this coastline.

STAND UP AND BE COUNTED… PLEASE!