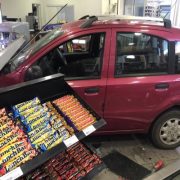 A local driver and his passengers were very fortunate to escape with their lives last Friday evening when at three minutes to seven he ploughed his Fiat Panda through the plate-glass windows of the shop at Sedgefield Shell Petrol Station.
It has not been possible to ascertain how or why this happened, but video footage caught on the Shell Select Store’s CCTV camera shows that the vehicle was travelling at quite a speed. Indeed it broke through a steel barricade bar before crashing through the glass, wiping out several shelving units, and finally coming to a halt against the fridges on the far side of the shop floor.
Staff on duty were fortunately not in the vehicle’s path, and managed to avoid any flying debris. Clearly unsure whether this was perhaps the start of an armed robbery, they rushed out onto the forecourt seconds after the car came to a stop.
As soon as he heard what had happened Owner / Manager Ian Sparks wasted no time in getting to the scene and was exceptionally relieved to find that no one had been badly hurt in the carnage he found.

“The shop can be busy on Friday evenings, often with young children coming in with their parents,” he explained, “My staff said that earlier there had been quite a few people in the store, it just happened that when the crash happened there was a lull in trade.”
Though the car had Eastern Cape number plates, it has been ascertained that the driver is a local man, though his name is being withheld whilst investigation into the accident’s cause is underway. He reportedly sustained minor injuries, whilst his passengers – a lady and a young child – seemingly escaped unharmed.
Ian says that though unhurt, staff members were very shaken up. The shop itself looked like a war zone, and Ian and his managers worked through the night trying to get it back into some semblance of order – which was no mean feat.
“One of the shelves that the vehicle crashed through was stocked with charcoal, so there was soot everywhere,” he told us on Monday.

Sedgefield has had a few of these ‘drive-through’ incidents over the years. Two years back Dwayne Vorster, a car guard, sustained serious injuries when a driver went through the plate glass windows at the Pick n Pay Liquor shop, and a number of years before that the Total Service Station, ‘La Boutique’ shop, was also on the receiving end of a badly aimed vehicle.
But it seems that the Shell Garage may hold the record for such incidents. The Sparks family have been running the popular petrol station for forty-two years, and Ian remembers a time a couple of decades ago when a similar crash occurred on their forecourt!
(An ‘as-it-happened’ video of Friday’s ‘drive-through’ incident may be watched on The EDGE Face Book page).