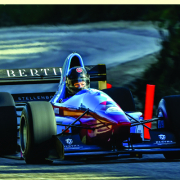 It’s official – the Simola Hillclimb has a new outright record! Andre Bezuidenhout lived up to expectations, as well as his bold pre-event promise of a sub-35-second time, by powering the agile 2007 Gould GR55 to the best-ever time on the 1.9 km Simola Hill, stopping the clock in just 34.965 seconds. He achieved this late on Sunday in the final all-or-nothing Top 10 Shootout for the Single-seater and Sports Prototype category. In the process, he slashed his current record time from 2018 by 0.563 seconds – achieving an astonishing average speed of 195.624 km/h!
“It was a close-run thing, as the shadows were already starting to come over the track when I did my run in the late afternoon,” Bezuidenhout said. “If we were 10 minutes later, I wouldn’t have been able to go that fast as the temperature began falling. So it was the perfect run in the end. I desperately wanted to do a 34, and the team worked very hard to achieve this great result.”
Despite having just taken a well-earned victory, Bezuidenhout is already looking forward to the 2022 Simola Hillclimb. “I think there’s still more to come from the car as, until now, I’ve been driving the car as it came from the UK in 2018. Now we’re going to start working on the suspension, and we are looking at adding launch control for next year because, at the moment, it’s 100% my right foot, whereas a lot of the other cars have traction and launch control systems.”
Robert Wolk was second in the Top 10 Shootout in his 2007 Ferrari-powered A1 GP car, ending on 37.205 seconds following consistent improvements throughout the weekend and a personal best time of 36.819 seconds in the Class Finals. Byron Mitchell finished third with a time of 40.381 seconds in his 2002 Reynard Formula VW single-seater, just half a second ahead of Andrew Rackstraw in a similar car.
Devin Robertson was the quickest of the sports prototype machines and fifth overall in the Top 10 Shootout, powering his high-revving 1.4-litre Suzuki-powered Radical SR1 Clubsport to 41.075 seconds, beating the only Ford 5.0-litre V8-powered Shelby CanAm in the country, driven by Rui Campos to a time of 41.676 seconds. Michael Verrier was seventh in the Nissan 3.5 V6-powered version of the CanAm on 43.645 seconds.
Andrew Schofield ended eighth in the 2015 Mygale Formula Ford (47.456 sec), with James Forbes ninth in his 2006 ADR MCE3 (47.751 sec). Finally, Megan Verlaque wrapped up her first Simola Hillclimb with an impressive time of 47.876 seconds in the tiny Suzuki 600 cc Speedcar Xtreme, rounding out the Top 10 with a super-competitive time of 47.876 seconds.