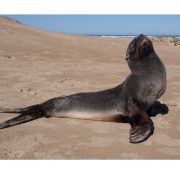 A little over 13 months after a Rockhopper Penguin washed up on Cola Beach in July 2020, this week, a rare Antarctic Fur Seal was stranded a few hundred metres from the same site beneath the towering fossilised cliffs.
Marine Biologist Mark Dixon of the Strandloper Project received a message from Joanne Scholtz, who had seen the injured seal on the beach east of the Cola Beach access stairs. Realizing that it was something different from the local Cape Fur Seal, Mark shared images with a regional ‘stranded marine mammal’ group and Dr Greg Hoffmeyer from Bay World in Port Elizabeth. Confirmation came back that it was definitely a different species. In fact, a very exciting find of a rare Antarctic Fur Seal. According to Dr Hoffmeyer, this is only the eighth documented record of this species along the South African coastline and the second one within one month.
Research cogs started turning as the Strandloper Project was granted ‘approved agent’ status to allow them to capture the seal, which, like all washed up and stranded marine mammals, is protected by DAFF legislation preventing unauthorized handling or possession of any marine mammal species.
The first task was to assess the seal’s size and condition before arranging its capture and transportation to Bay World for veterinary treatment and rehabilitation prior to release. The seal was obviously seriously undernourished, as witnessed by the ‘dipped space’ between the rear of the head and the shoulder ‘hump’.
“In a healthy, well-fed seal, it would be a solid profile of blubber, which would be both a source of thermal protection and energy reserves,” explained Mark. He added that the tracks leading up from the beach to the shady area at the cliff base where the seal was resting indicated that it was unable to use its rear flippers for propulsion, another indication that it was in poor condition.
Whilst Mark waited for the Bay World crew to arrive, the morning went smoothly with the seal sleeping for three hours and beach strollers stopping for a glimpse and to ask questions.
Then, half an hour before the anticipated arrival of the Bay World crew, it woke up, struggled into the sunlight and then headed down towards the surf zone in spurts.
If it had made it to the ocean, its chances of survival would have been very small, more likely non-existent. The following 25 minutes must have seemed comical to anyone watching, as the seal lunged for the ocean and Mark attempted to block it with a stick, simultaneously trying not to hurt it and avoid getting bitten. The two darted along the beach with the seal making sudden changes of direction to gain ground, right up until the team arrived with a crate.
Safely in the crate, it was loaded into a bakkie and sent off to PE. At Bay World, it will be treated for dehydration and fed a diet of fish.
“Their usual diet is Krill, squid and fish,” says Mark, “Before a seal is released, it has to reach a target weight according to its species and length. When it reaches this, it is taken 40 nautical miles out to sea and released into the Agulhas Current.”
Telemetry from previously released seals has shown that, in the current, they move approximately 200km/day and will take nearly 25 days to reach their home range down south.
“This vital rescue of a rare vagrant wouldn’t have been possible without the network of concerned and observant local residents, authorized rescuers and an experience institution,” reflected Mark.
If you find a seal on the beach, determine whether they are just resting or are in poor condition. Remain at a distance that does not intimidate or disturb them and take a horizontal photo. Then contact the local stranding group or authority.