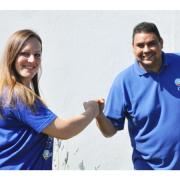 Sedgefield’s Wards 1 and 2 were both won by the DA. According to the Electoral Commission website, Levael Davis retained Ward 1 by securing just over 45% (1189 votes), with the ANC taking 35% (913 votes). In Ward 2, newcomer to the DA candidate list Cleone Vanston received a convincing 1 466, (64,67%) of the total Ward 2 votes. Her closest rival KIM took 10,59%, and the GOOD Party came third with 8,16%.
Both DA candidates have voiced their gratitude to the voters who placed their faith in them.
Levael Davis, who is also his party’s Mayoral candidate, looks forward to continuing the hard work he is so well known for.
“Firstly, I would like to thank the Lord for giving me another term to serve our community. I also thank every voter for their support, and I look forward to achieving even greater successes in the future. There are some great projects in store, so I will continue to work alongside our Ward 2 Councillor for all our residents and a better Sedgefield.
Cleone Vanston is grateful for this new, albeit rather daunting, opportunity.
“I would like to thank all who came out to vote in our local government elections, despite the weather and challenges we faced. Thank you to all our DA voters for your trust and support.
I look forward to serving our community in Sedgefield, Karatara and the surrounding areas in my term as your ward 2 DA councillor.”

NOBODY’S A WINNER
Scroll to top