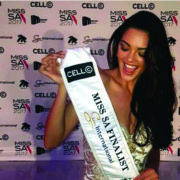 It’s official! Sedgefield’s very own Demi-Leigh Nel-Peters has been announced as one of the 12 Miss South Africa finalists.

Surely the hearts of the whole community will be behind this lovely lass as she competes to wear the prestigious crown at the Sun City Superbowl on Sunday, March 26.

Should she be crowned Miss South Africa 2017, the ex-Sedgefield Primary School head girl will receive R1-million in cash from sponsors Sun International and Cell C, as well as a bouquet of prizes that have elevated the competition to one of the richest pageants in the world.

Demi-Leigh, who is a B.Com Business Management and Entrepreneurship graduate of North West University in Potchefstroom, took a break from her busy modelling career to come to Sedgefield and visit her family over the December holidays. During this time she raised over R6000 for the Fresh Start charity.

The Miss SA finalists come from three of the country’s nine provinces: eight are from Gauteng, Demi and one other from the Western Cape and two from Kwa-Zulu Natal.

When we caught up with Demi she took time from her busy schedule to share a Sedgefield memory.

“I moved to Sedgefield with my parents at the age of eight. The older I got the more I realized how privileged I am to have grown up in a town where everyone knows everyone and where people truly care and look out for each other,” she said.

“Living in a big city now, I thank my parents for giving me the quality of life every child deserves. Playing in the street until it’s too dark to see the ball anymore or taking a walk to school in the morning. Sedgefield made me humble and taught me to appreciate the small things in life. One of my life mottos is The small things in life add up to be the big things.”

Chuckling she added “My modelling career also started in Sedgefield when I won Little Miss Sedgefield in khaki safari pants and tekkies. Luckily my fashion sense has improved over the years.

Parents Anna-Marie and Johan Steenkamp, still living in Sedgefield, are understandably proud of their daughter’s achievements, but won’t take any of the credit for themselves.
“Demi is responsible for her own successes,” says her mother, “She works very hard, and once she sets a goal, she achieves it. We are very blessed as parents to have such an angel for a child.”

The EDGE has been following Demi’s modelling progress ever since she was a young Sedgefield Primary student – once even suggesting she was “A future Miss South Africa in the making?” Little did we know how prophetic that headline was!

For the first time in the history of the Miss South Africa pageant, members of the public have been invited to vote for their favourite competitor. Public voting for the finals opened on midnight on February 2 and SMS votes will have a 25 percent weighting of the overall voting towards the winner, with 75 percent resting with the official judges. Voting is done via SMS – and the public may send the number of their favourite Top 12 finalist (Demi’s number is 03) to the short code number 45791. Each SMS will cost R1.50 and proceeds from the competition will benefit the Cell C Girl Child Bursary Fund.

MIDSUMMER’S NOT TO BE MISSED
Scroll to top