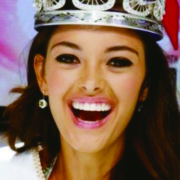 All we can say is WOW! Our very own Demi-Leigh Nel-Peters has just been crowned Miss South Africa 2017 at the Sun City Superbowl.

Demi- Leigh – a former head girl of Sedgefield Primary in 2008 (not to mention wearing the coveted ‘Miss Sedgefield Primary’ crown the same year) has long been the ‘darling’ of this slow town as we have followed her schooling and modelling career with interest. Indeed way back when she was a young teenager and began winning pageants, this very paper suggested (perhaps with a little tongue in cheek at the time) that we could have a future Miss South Africa in the making.

Little did we know…..

And though nobody can deny the beauty and poise that radiated from the young lady throughout the whole rather nerve-wracking finals evening, Demi is certainly not all about looks. As previously reported in The EDGE she has just finished her final year in Business Management and Entrepreneurship at Potch and will be returning to do her honours next year.

As the new Miss South Africa Demi will receive R1m in cash from sponsors Sun International and Cell C, a Nissan Duke as well as a bouquet of other prizes.

During her reign she will represent South Africa at both Miss World and Miss Universe pageants.

From the buzz of social media there is HUGE pride about Demi’s wonderful achievement from all corners of the village, with congratulations already pouring in from Tourism and Ratepayers and so many others within minutes of the judges’ announcement.

“I would like to thank my Heavenly Father for everything He has blessed me with just as he promised in Jeremiah 29:11, “I know the plans I have for you,” declares the Lord, “plans to prosper you and not to harm you, plans to give you hope and a future.”

As a young girl, I would watch the Miss South Africa competition wishing with all my heart that one day too I would be able to walk on that stage just like those glamorous women I saw on television. Tonight that dream came true. This dream of mine was shared by my family, friends and those who knew me. But little did I know how blessed I would be with support of people all over the world dreaming this dream with me. So, as I stand here tonight, I wear this crown not only for that little girl in front of the TV but for every little girl with a dream, every South African with a dream of a better life, for every single person with a wish of wanting to live as the highest truest versions of themselves.

I will continue to wear this crown for all of them throughout my reign.

I vow to dedicate the next 365 days of my life to serve the people of South Africa, to be a voice to those who are afraid to or cannot speak up and to represent the whole of our beautiful nation. I vow to listen, to be there, to help where I can and to recognize that we all want to be heard, we all want to be validated. I hear you, I see you, I am you!

I stand here in awe of the women who came before me. I will build and add to this very strong foundation that has been laid there for me by all the previous Miss South Africa’s, who I look up to and respect in so many ways. I will take the reins with pride and honour and run with it. I stand on your shoulders knowing that the foundation you’ve built is unbreakable because of your passion, dedication and selflessness. The way you’ve given of yourselves and how you’ve inspired our nation will be my motivation, my strength and my compass as I embark on this journey.

To all four of my parents, mom, dad, stepmother and stepfather: Thank you for raising me the way you did. Thank you for being hard on me when it was necessary, for instilling in me a sense of responsibility, not only for myself but for others around me as well. I didn’t always like it then but I am thankful for it now. Thank you for always leading by example, for always having my back and for loving me unconditionally. I stand here tonight as a young woman with the world at my feet only because you made me realise the power that was already inside of me. I will forever love and honour you.

To Cell C, Sun International and all the sponsors, thank you for making my journey as a finalist unforgettable. There is a reason why this pageant is considered one of the best in the world. The way you support and uplift young women in South Africa has instilled a new sense of passion in me to strengthen a new generation of women that will one day lead this nation. I am beyond excited to take on this year and leave a legacy.

I believe that one shouldn’t get into something only to test the waters, but to make waves. That is exactly what I tend to do. My vision for my year as Miss South Africa 2017 is to help woman to help themselves. Not only to give them a fish to eat but to teach them how to fish in order to create a sustainable life for themselves. I look forward to partnering with corporates, government and social entrepreneurs to implement mentoring programmes to teach young South African woman how to start and run their own businesses in order to create a sustainable future not only for themselves but for their communities as well.
I want to leave a legacy of helping young South African women realise and nurture their own God-given talents to create opportunities and support themselves and those around them and to take their rightful place in society.

Tonight I stepped on that stage as Demi-Leigh Nel-Peters; I now greet you as Miss South Africa 2017. Thank you.

If Sedgefield wasn’t on the map before – it certainly is now. Well done Demi-Leigh!