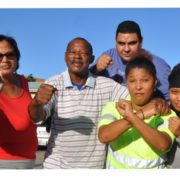 It seems that residents and community leaders of Smutsville have been pushed past their limits when it comes to the scourge of drugs in their hometown.
The ball started rolling a week ago when an angry resident took to a social media platform to name and shame alleged drug dealers in her neighbourhood.
Whilst some decried this bold move, it has since stirred up a nest of angry community members who are tired of having their lives so detrimentally affected by the problem of drugs. Parents whose children have fallen prey to addiction, or the violence that it brings to the streets, families who have had their possessions taken by teens (sometimes their own family members) so desperate for tik they’re willing to risk jail .
The problem is made that much worse by the fact that there is little to no police presence in Smutsville due to an under-resourced station positioned in the village.
Furthermore, it appears that even when drug dealers are arrested, all too often they are back on the streets within days. This is certainly not sending a good message to the younger members of the community.
Running on the forefront of this anti drug-dealer drive is ex-councilor Irene Grootboom. She is determined that a difference can be made if the community stands strong together with collective courage.
Joined by the current Ward 1 Councillor Levael Davies and other community leaders, including representation from the local school, the plan is to build up a mass action against the drug dealers, doing whatever it takes to expose them and bring them to book.
They are also calling on the police and indeed the courts to play their part and take this problem seriously, and members of the wider Sedgefield public to assist wherever and however possible.
Whilst talk is cheap, it appears that action is what’s happening in Smutsville. There are reports of a group of women who identified a drug dealer living in their neighbourhood and forced him to move elsewhere.
“That’s it,” says Councillor Davies, “We need to let the drug dealers know they are not welcome in this town!”
Furthermore, defunct neighbourhood watch groups are being re-formed so that the streets can be manned and monitored at all times.
Mike Hofhuis of Sedgefield’s Community Orientated Policing applauds the courage of this new determined fight. “Now is the time for the residents of Smutsville to stand together against the huge drug problem plaguing the community,” he said, “However residents are urged to please work hand in hand with the relative authorities to bring the drug dealers to book. They must abide by the laws of the land.”
A public meeting is to be held at Sedgefield (Smutsville) Primer School Hall at 7pm on 23 April to get input from the community and relevant authorities and devise an action plan. Residents are urged to attend.

SEARCH ON FOR MISSING TOURIST- Update
Scroll to top