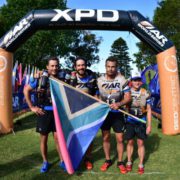 On the morning of Monday 14 November, just before 8am local time, the dark horse Team Sanlam Painted Wolf finished the Adventure Racing World Championships in a phenomenal fourth place, after a nail-biting sprint finish. Not even listed in the world adventure racing rankings, the team – made up of our local lads John and Mark Collins along with Andre Gie and Robyn Kime, showed nerves of steel, strength and stamina bar none, completing the 627km course one minute ahead of fifth place Team Naturex, a French team ranked 6th in the world, in 100 hours 25 minutes.
Speaking to his wife, Christine, once he had recovered enough to call her, John Collins said it had been the most exciting finish he had ever experienced in adventure racing. “And it’s actually thanks to the Aussies that we came fourth!” he told her. Collins explained how earlier in the race the Sanlam Painted Wolves had mistakenly left some stuff behind at a check point – and this resulted in a 30 minute penalty at the final check point before the final 18km run to the end. They had been more or less level with Naturex at the time, and so had to watch this team start the final leg 30 minutes ahead of them.
When they started along the beach they did not think they would ever catch up to the French team, and so were taking it easy, thinking that at least they were secure in 5th place. Then with about 7km to go they realised that an Australian team, Shotz Sport Nutrition, was coming up fast behind them. Suddenly under threat, they had no choice but to increase their running speed as much as their tired bodies would allow, desperate to stay ahead.
This near disaster turned out to be a good thing, because about 2km from the finish they met Naturex – coming 4th at the time – heading down onto the beach! The French team had decided to run part of the last leg on a parallel tar road route, and obviously not reckoned on the South Africans’ surge of speed – the teams were now neck and neck.
Despite having already covered a distance of 625km in just over 100 hours, the race was on! Fortunately for South African fans, the pump of adrenaline took the Sanlam Painted Wolves across the finish line a minute ahead of their French rivals, and fourth place was theirs. And this all thanks to the Aussie pressure from behind!
The winners of the World Championships were team Seagate of New Zealand (ranked No 1) who completed the course in a time of 95 hours and 4 minutes, whilst USA’s Adventure Medical Kits (ranked No 3) came second and Columbia Vidaraid- also of America and ranked No 2 – took third place.
97 teams of the world’s best adventure racing athletes from 20 different countries and every continent competed in this event, including another Garden Route flavoured team Merrell Adventure Addicts, comprising Graham Bird, Tatum Prins, Hanno Smit and Donovan Sims. This team, ranked 5th in the world, were favourites for a top ten position in the World Championships, but were unfortunately plagued with misfortune during the race, including a supply box containing much-needed food going missing before the fourth leg 95 km bike ride, and a broken bike derailleur which simply wasn’t fixable and could only be replaced much later in the race.
Showing their famous never-say-die attitude the Merrell team pushed through, eventually completing the course in 126 hours, 12 minutes and 48 seconds. Despite their misfortune along the route, they finished in a commendable 28th position, with their countrymen from Sanlam Painted Wolf cheering them in.
The 627km course itself was something that ordinarily only super-humans would consider doing. Thick forest, mountainous terrain, rocky shoreline, winding rivers, rapids, claustrophobic caves – basically anything the race conveners could throw at the athletes taking part. The 18 legs included a total of 115km on foot – trekking , running and climbing, 322km of mountain biking, 185km of kayaking and pack-rafting and 5km in a caving section.
Though adventure racing certainly isn’t a spectator sport, there was much excitement as family, fans and friends of the teams kept up with their progress online via satellite tracking, watching the dots move around the relief map, and keeping in contact with Terence Vrugtman – the team’s ‘on the scene’ photographic journalist, as well as other supporters via a very active Whatsapp group.
Huge congratulations to both teams – who certainly have done the whole of South Africa exceptionally proud.