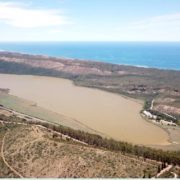 Whilst locals have known for some time that ‘Groenvlei’ (known to some as ‘Lake Pleasant’) has been suffering over the last year or so due to the ever-increasing population of the invasive Carp, there are some who feel that this once-pristine water system has now reached a point of no return.
The visual evidence that they may be right is substantial. The colour and clarity of the spring-fed fresh-water lake have changed so drastically that it could easily be mistaken for a muddy mine-dump dam, a far cry from the sparkling waters most locals know and love.
Cape Nature, the custodians of Groenvlei and the Goukamma Nature Reserve that surrounds it, have announced that the lake is indeed in a state of serious decline, and are asking for assistance in resuscitating it back to its former glory.
In a press release issued this week, they emphasised the importance of Groenvlei, saying it contains genetically unique populations of two indigenous small fish species, the Estuarine round herring and the Cape silverside. (The press release in full is on page 3)
Records show that the original release of Carp into Groenvlei was done as recently as the late 1990s. According to Rhett Heisman, manager of the Goukamma Reserve at the time, a fisherman had been overheard boasting that he had thrown in ‘a few carp’ because they were his preferred catch. Unfortunately, the perpetrator could not be arrested as his own testimony was the only evidence against him.
Surely a lesson that nature should not be tampered with.