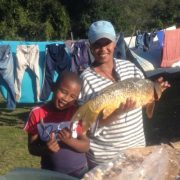 The netting of invasive carp in Groenvlei provided a rich source of protein for over 1000 people in Smutsville on Saturday 25 July, when just under 400kg of the fish was handed out to members of the community.
The carp were netted the night before by a team of Sedgefielders who have long been working on reducing the problem of the invasive carp that have had a devastating effect on the lake for the last few years. From the nets, the large catch was placed straight into the ‘Gift of the Givers’ refrigeration truck so that they could be frozen before distribution.
Recipients, who had been identified by the Municipal Social Services team, were exceptionally glad to receive the fish, and Gift of the Givers Southern Cape Volunteer Area Manager Mario Ferreira said that it made all the logistical work worthwhile just to see their reaction.
Working according to Government Health Department specifications, the fish had been tested by local Microbiologist Nico Alberts of Outeniqua Laboratory Services to make sure it was fit to eat – and it passed with flying colours.
10 of the fish- about 45kg – was given to Sedgefield Mobile Meals, and Chairman
Jim Mitchell was able to serve it up with vegetables to feed 80 families in need.
“We were worried as Carp has a reputation of being a muddy fish – but the feedback we got from the recipients was that they would like this to be a regular thing!” he reported back.
What really makes this a win-win project is the positive effect the removal of the carp has on the Groenvlei Lake itself.
Petro van Rhyn of Cape Nature says that Groenvlei is an important natural lake from both a conservation and recreational angling perspective. It contains two small indigenous fish species, the estuarine round herring and the Cape silverside as well as several species of alien fish.
“Carp were illegally introduced to Groenvlei in the 1990s,” she explained in an email, “Subsequently, their numbers have increased to such an extent that they cause great concern amongst scientists and conservationists.”
She went on to point out that feeding habits of carp cause habitat degradation (reduction in aquatic plants, increases in turbidity) by disturbing the lake bottom, clouding the water and thereby reducing visibility which hinders other fish from finding food. Carp also prey on the eggs of indigenous fish.
Cape Nature believes that the gill nets are an effective control method and that as custodians of Groenvlei, they partner with the local team of fishermen, Knysna Municipality and Gift of the Givers to supply the carp to the local community as a food source.