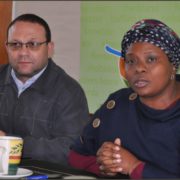 In a special Council Meeting held this afternoon at Knysna Council Chambers, Executive Mayor Eleanore Bouw-Spies tabled a motion to declare Knysna a ‘Local Disaster Area’, receiving full support from all the other councilors. This as flare-ups of the widespread fire are being reported in Belvidere, Brenton and Elandskraal due to increasing wind speed.

In terms of section 55.1 of the Disaster Management Act, this declaration will give the municipality access to national, regional and local government funding reserved for such emergency situations, thus making them better-resourced to not only continue the ongoing disaster management but also mop up and rebuilding operations that will need to be faced in the near future.

At a media briefing before the meeting a visibly tired but determined Bouw-Spies pointed out that whilst the blaze had seemingly been under control for most of today, the wind had picked up again and reports of flare-ups were coming in, keeping the huge numbers of fire crew and the helicopter pilots busy. She asked that people avoid returning to evacuated areas as there was no saying if, when and where the fires could rage out of control again, and that ‘bombing’ the fires from the water-carrying choppers is not possible if people have moved back into the danger areas.

The Acting Municipal Manager Johnny Douglas said that firefighters had been arriving in busloads from all over South Africa to assist fighting the fires, and that they were starting to deploy members of the ‘Working On Fire’ crew to other areas.

Also at the briefing, SAPS Spokesman Captain Malcolm Poje reported that there had been misinformation doing the rounds regarding people being caught starting the fires.  He said all of these concocted rumours were unfounded and no cases of arson had been opened. Asked about ‘looting’ the Captain said seven people had been arrested for being in possession of stolen property, some of the property later being found to have been stolen from a fire-affected home in Brenton.  Answering a question about the availability of a ‘Missing Persons’ list of people displaced by the fires, he said that there had only been one report of a missing person, a 70 year old Sedgefield lady, who had been found at her friend’s home a few hours later.

Meanwhile the water situation in Knysna has become critical with some areas having no water at all, due to there being no power at a few of the pump stations. Water collection points have been set up in the area where residents affected may collect 400 litres per day.

SEDGE OUT OF DANGER
Scroll to top