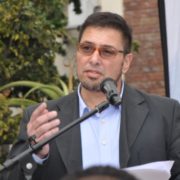 On Monday 30 September DA Mayor Mark Willemse received official notice that his membership of the Democratic Alliance had been terminated.
This is the result of a long-term spat between Willemse and the upper echelons of the party, after he and fellow councillor Peter Myers ‘voted their consciences’ in a vote of no confidence against former DA Mayor Eleanore Bouw-Spies last year. Thereafter he was elected unopposed as Knysna’s Executive Mayor.
The news of this latest move against him by the DA came in a letter from the party’s Federal Executive. In effect, not having party membership would mean that Willemse would no longer be Mayor, his council seat would be vacant, and a ward election would follow in due course.
The normal procedure would be for the Fedex to give notice of this decision to the Municipal Manager (MM), and he would, in turn, contact the IEC to begin the ward election process. Whilst confirming that he had indeed been informed, MM Dr Vatala has said that in terms of the Municipal Structures Act, he has 14 days to consult with the IEC and to call and set a date for a by-election.
Meanwhile, Mayor Willemse is determined that he will not be kicked out of the DA.
“I believe this termination is unconstitutional, and, as a matter of principle, I will fight this process,” he calmly told us.
And true to his word, Willemse has instructed his lawyers to challenge the matter in court and initiate an interdict to halt the election process. The MM has already been informed of this intention. Watch this space!