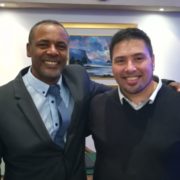 This last week has been an unprecedented time for local politics, with councillors voting for their opposition and party leadership instructing their newly elected mayor to resign.

At the time of going to press, the DA’s Councillor Mark Willemse was in his fifth day as the new Executive Mayor of Knysna. Whilst this could change any moment if the DA provincial leaders have their way, there are many local residents who are determined that he should stay, including members of the Knysna Ratepayers Association.

This turn of events started last week when a strategic move in Knysna Council Chambers ousted the then Mayor Eleanore Bouw-Spies, and saw ANC and other opposition parties voting Willemse in to take her place.

This most extraordinary council meeting was held on Wednesday 6 June, with the agenda including approval of the IDP (Integrated Development Plan), Mayor Eleanore Bouw Spies’ presentation and the approval of the Annual Budget, and a ‘vote of no confidence’ in the Mayor, tabled by the ANC, who cited “failure to perform her duties and ensure service delivery in the greater Knysna area, and effective functioning of the council” as the reasons.

The meeting quickly turned into a political circus when the parties erupted into a shouting match, with neither side giving the other a chance to speak. DA Speaker Georlene Wolmarans could do little to control the goings on, because opposition councillors were determined to challenge her decision to keep the ‘vote of no confidence’ as the last item on the agenda.

They insisted that such an important item should be moved up to be addressed earlier, suggesting that a budget proposed by a Mayor who could lose her position on the same day simply didn’t make sense. But whilst the Speaker does have the authority to move items up and down the agenda, Wolmarans would have none of it, despite the continuous clamour from around the council table.

After several adjournments, including a meeting of the chief whips in an attempt to calm things down, and a caucus meeting for both the ANC and the DA, the ANC and other parties finally agreed to follow the agenda in its original format.

It seemed it was back to business as usual as Mayor Bouw-Spies presented the IDP and Budget, both of which were approved by council. But when the time came for the vote of no confidence, seven of the ten DA Councillors left the chambers, not wishing to take part in the vote. The three remaining were Speaker Georlene Wolmarans, ex Deputy Mayor Peter Myers, and Ward 9 Councillor Mark Willemse. A vote ensued and, with only Speaker Wolmarans voting against the motion, Bouw-Spies was officially no longer the Executive Mayor. The Speaker then left the chambers, and once the remaining councillors had voted in an ‘acting speaker’ , Willemse was elected Executive Mayor of Knysna, with COPE’s Ricky van Aswegan his Deputy.

This sent the DA’s top dogs into a total spin, with Western Cape leader, Bonginkosi Madikizela, vehemently labeling the affair as a ‘coup’, and accusing Willemse and Myers of colluding with the opposition for their own gain.
“It is protocol that when members of a caucus lose confidence in their Mayor, they notify the party in order to get concurrence to vote with their conscience. This is established practice to ensure that the party stays informed of its governments. It can never be acceptable for any member of the party to make such a decision without notifying the party on matters that have such huge ramifications as we’ve seen in Knysna,” he said in a press release issued from his office.

On Friday Madikizela and DA Provincial Chairperson Anton Bredell rushed through to meet with the Knysna DA Caucus, and have since put pressure on Willemse to resign from his new Mayoral post.
“(Willemse) is also the Eden District Speaker and therefore by law cannot accept a second executive position,” Madikizela’s press release stated, “Secondly, voting with your conscience becomes questionable if you are the direct beneficiary, which is the case here.”

But the only resignation letter the new Executive Mayor has tendered is for his position as Eden Speaker, which he handed in on Monday 11 June.

Willemse is certainly not without support, and it is quite evident that not everyone shares the DA hierarchy’s views on this issue. The new mayor’s appointment has been referred to as ‘A rare victory for democracy’ by the Knysna Ratepayers Association (KRA) who have publicly pledged their support for Willemse in the following statements.
“With two DA councillors against the nine of the opposition, the ANC could have taken over the town, yet remarkably councillors unanimously elected a DA Mayor. In doing so they proved that they had no self-interest and truly wanted to rescue Knysna from its poor leadership.”
“The only real opposition seems to be from DA’s masters in Cape Town. They would be well-advised to back off, and not to interfere. Intent on advancing the political fortunes of the former mayor, they have inexplicably turned a deaf ear to the complaints of Knysna’s residents for the past two years. Support for the DA in Knysna has evaporated during that period, but their masters in Cape Town have blithely ignored this.”
“Mayor Mark Willemse has our full confidence and support. We respect him for committing to his oath of office and for acting in the interest of Knysna. The support from the people of Knysna is overwhelming. The people’s message to Cape Town is clear: our town requires honest and principled leadership. We wish him strength for the task that awaits him.”

A DAY NO-ONE WILL FORGET
Scroll to top