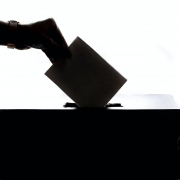 The results of Knysna’s local elections are in, and it is clear that no party has a ‘winning’ advantage.

With news breaking early yesterday of the ANC taking six of the eleven wards (3,4,6,7,8 and 11) and the DA the remaining five (1,2 5,9, and 10), it seemed that the two rival political powerhouses would be leaving the smaller parties in the dust.

But towards the end of the day, it appeared that the proportional votes were making a substantial difference to the council seat allocation, not only pushing the DA (with eight seats) one seat ahead of the ANC, but more importantly, giving neither of them anything close to an outright majority.

Though KIM (Knysna Independent Movement) did not win any wards, they won two seats through the proportional vote, as did the PA (Patriotic Alliance). The remaining seats went one apiece to the PBI (Plaaslike Besorgde Inwoners) and the EFF (Economic Freedom Fighters).

According to figures from the Electoral Commission website, when combining the ward votes and the proportional (PR) votes for Knysna as a whole, the DA won 35,44% of the votes and the ANC 33,2%.

The fact that no single party has an outright majority in council means that both the top two parties – the DA and the ANC – will need to form coalition agreements with other parties to gain control. Indeed, unless they form a coalition with each other, which is highly unlikely, both of these parties will need to secure the support of at least two of the smaller parties to get a majority.

The Electoral Commission still has to declare the results to be accurate. Meanwhile, the Acting Municipal Manager, Dawie Adonis, has scheduled the first meeting of the newly elected Knysna Council for 11 November. At this meeting, councillors will be sworn in and then go through the motions of electing a House Speaker, Mayor, Deputy Mayor and a Council Whip. They will also vote on which councillors should take Knysna’s three seats on the District Municipal Council.

Whoever is chosen as Mayor will also announce his or her Mayoral Committee.

No doubt there will now be a time of feverish scrabbling amongst politicians as the larger parties attempt to curry the favour (and vote) of the smaller parties.