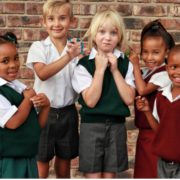 Picture by Emma Rorke: Short back and sides! It’s time for all the little Grade Ones to put on their shiny shoes and new uniforms and join the academic race as scholars. These children from Laerskool Sedgefield Primary and Smutsville Primêre clearly have mixed reactions.
Front: Misha George and Shadrico Jacobs – looking both nervous and excited at the prospect of school. Back: Connor Webster and Zenoshca ‘Pinky’ du Plessis (both brandishing scissors) seem very happy to assist in getting the incredulous Griffen Venter ship-shape and school rule ready.

Like every year since time immemorial, the end of the Summer Holiday means it’s time to go back to school! And surely, across the country it’s the same:- none can be more excited (or full of trepidation) than the little Grade Ones (excepting, perhaps, their parents).

Before the first day chaos descended The Edge contacted local schools to report on the influx of youngsters.

Laerskool Sedgefield Primary reports that their admission lists are full and that they have 38 new learners entering Grade One, half boys and half girls. They will be taught by Sone Rossouw. LSP has a total of 280 pupils gracing their desks this year.

Sedgefield Primêre (aka Smutsville School) boasts an intake of 35 new little scholars who will fall in with the 60 Grade R’s who successfully graduated last year. All these youngsters will be under the watchful guidance of their two Grade One teachers, Lauren Saayman and Inge Krieger. Smutsville School has a total of 653 children in their educational facility.
Ruigtevlei Primary, the little rural school on the road to Karatara, has ten new little souls starting their school careers in Grade 1 and there are 55 pupils in the school altogether. Their teacher, Juf. Elfriede Burger is sure to have her hands full – as they each assert their individuality.

According to efficient and well rested Principal Louw, Karatara Primêre is all set up and ready to go for the intake of 25 little Grade Ones. The Grade One teacher who will be welcoming them is Juf. de Bruin. Karatara Primêre has approximately 185 scholars this year. They are steadily growing!

Hoekwil Primary also has a number of our local children attending their halls of learning, and this year, according to Antoinette the secretary, there will be 32 Grade Ones received by Juf. Estelle. Hoekwil Primary has approximately 165 children in its care.

All the best, little ones, as you take your first steps in the journey of your academic careers!