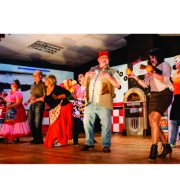 It has been said before that the run of Sedgefield’s Melodrama is a ‘win-win-win’ situation, but it is surely worth saying again!

Why? Because not only do local audiences get an evening of side-splitting entertainment, watching all the often-familiar faces of locals making outlandish fools of themselves (and more) on stage, but Sedgefield charities get a HUGE donation to bolster their coffers, AND the cast and crew have two months of fun and frivolity with friends old and new.

This year’s five performances have once again brought Sedgefield’s well-known generosity to the fore, with R68 000 worth of tickets sold (extra tables had to be added in on the last two nights) and R43 000 raised in the post-show ‘American auctions’. The 36-strong team may now surely relax, put their feet up, take a well-earned rest …. and start thinking about acts for next year’s show!

“Thanks to everyone for the fantastic support of the 2019 Melodrama!” says Producer Margie van Rensburg.

WHAT’S GOING ON?
Scroll to top