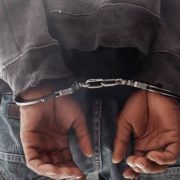 Sedgefield’s local anti-crime groups are making efforts to ensure that a dangerous suspect who was recently arrested by Knysna Police be kept incarcerated until his court case is concluded.
Last week Knysna Detectives made a major breakthrough when investigators – deployed to bring perpetrators of serious and violent crimes to book – arrested 34-year-old Ashwill Harvey at Sedgefield on Monday, 19 July 2021. His arrest was linked to the robbery and assault of a woman on Cola Beach on Sunday evening.
Investigation into this incident revealed that the 33-year-old woman (name withheld) parked her vehicle at the Cola Beach car park and went for a stroll on the beach at about 18:40 when she was accosted by the suspect. It is further alleged that he forced her into the bushes, where he assaulted her and tied her up.
He took her personal belongings, including her car keys and her small dog, before leaving the scene. He then proceeded to take the victim’s Volkswagen Polo and drive off.
Though the victim sustained head injuries during the ordeal, she managed to make her way to a house over the road from the car park and ask for help
After alerting the authorities, the homeowner got in his car and pursued the suspect. It was fortunate that the suspect was not driving fast at all, and soon the Polo was spotted by the pursuers along Claude Urban Drive. They caught up and forced the suspect off the road, at which point he got out and fled on foot. The homeowner was able to swiftly return the dog to the victim.
Harvey’s freedom was short-lived when investigators tracked him down to Smutsville, where he was arrested late on Monday afternoon. The suspect remained in custody and appeared in the Knysna Magistrates’ court on Wednesday, 21 July 2021, facing charges of robbery with aggravating circumstances and theft of a motor vehicle.
During that court appearance Harvey was remanded in custody and is expected to be in court again on 30 July 2021.
Meanwhile, Sedgefield’s COP (Community Orientated Policing) and local Neighbourhood Watch groups circulated a petition for locals to sign. The petition asks the court to oppose bail for Harvey and keep him in the custody of the Department of Correctional Services until his trial date. This due to fear for the general safety of residents should he be released until the date of his trial.
This request to the court is further underlined by the fact that the same man was arrested in 2019 for a similar attack on a young woman along the same beach. The victim of that crime confirmed that she had been in court earlier this year for Harvey’s trial, but as far as she knew, the case was still ongoing. She was unaware of the new case against the same man.
We asked if the police could comment on the connection of the two cases, but they remained tight-lipped for now, pending Harvey’s future court appearances.
“This office is not in a position to respond to previous cases. Matters pertaining to previous arrests as well as convictions would be dealt with during the formal bail application,” Sergeant Chris Spies of the SAPS Communications Department said in a statement.
Meanwhile, investigation into the latest case continues, and we have it on good authority that the victim is recovering well and her dog is fine.