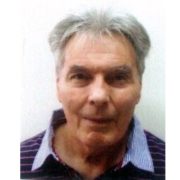 Sedgefield residents were dismayed to hear that the body of Anthony Turnbull (77) was found early evening of Sunday 1st April on an empty property in Begonia Street, Sedgefield. Police say that no foul play is suspected.
The elderly man was reported missing on Wednesday 28 March when he failed to return from his habitual morning walk, for which he had set off at around eight in the morning.
A search party was assembled by SAPS warrant Officer Kapp, including members of SAPS, the Traffic Department, the Fire Department, NSRI, Community Orientated Policing (COP), Sedgefield Neighbourhood Watch, Suiderkruis Security and Fidelity ADT.
It was believed that the missing man had been seen on Cormorant Street near the ‘Sedgefield Castle’ so the search fanned out from that area right down to the water’s edge, with NSRI searched along the beach using quad bikes.
Alerts and updates were also put out on various platforms of social media, and though several reports of ‘sightings’ that came in were investigated thoroughly, none yielded results.
Turnbull was eventually found by Juanita van der Westhuizen, a Neighbourhood Watch member, whose dogs had led her to his body in the thick undergrowth.

GLOVES OFF IN HEATED DUNE DEBATE
Scroll to top