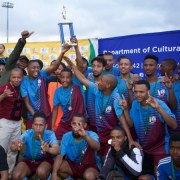 Our boys have done it again! Only weeks after bringing home the Knysna Local Football Association (KLFA) Easter Tournament Trophy, the men from Smuts United are flying the Sedgefield flag high once more – this time as victors of the Knysna Oyster Soccer Tournament. The match took place on the Loerie Park field, and opponents FC Rebels from Hornlee certainly did not make it an easy win for the Smuts squad.

The exceptionally close game ended on a single goal difference. Smuts United team captain Corne Melite celebrated a brace of goals, one in each half, with No. 6 Jeswin Windwaai also managing to boot one home in the second. The Rebels managed to equalise in the first half, but when Coach Pieter Hardnick brought on his ‘supersub’ Ayanda ‘Nomvete’ Oniwe at No. 11 after the break, Smuts United’s game went into super drive. Whilst Ayanda didn’t score, the quick-footed centre-forward was instrumental in setting up both goals in the second half for his skilled teammates to hammer into the back of the Rebels’ net.

The Hornlee crowds had some reprieve when their side managed to cut the lead after catching the Smuts United lads on the back foot whilst they were still celebrating their third goal, but though the teams battled back and forth in each other’s territory, this was to be the last goal of the match, and our Smutsville team’s supporters roared with delight when the final whistle blew!

It certainly was a day of celebration for the Smutsville club. Earlier, their Under 13 team had won their division of the tournament, beating Pine Stars by five goals to four after a penalty shoot-out.

“Right from the beginning, we were so proud, opening the game in the brand new shirts Sedgefield Lions had recently given us. We want to thank all those who have assisted us along the way:- Our sponsors, Miss Kay Rob, coaches Pieter Hartnick and Gavin Kamfer, our management team, and under-13 coach Adam Hartnick,” Says Smuts United’s Club Secretary.

This is the first time a Knysna Local Football Association team has won both the Easter and the Oyster tournaments, and now all eyes will be on the logs for the KLFA league to see if Smuts United can make it a hat trick – a feat never achieved by another Knysna team! They only have two games left, both to be played this coming weekend, Saturday 23 and Sunday 24 July. If they win even one of these matches, Smuts United will finish at the top of the league and truly have their name engraved in the history books of local soccer.