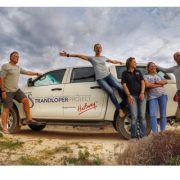 For the past six months, a team of six marine warriors have been planning the Strandloper Project coastal expedition and are finally set to start off on their ten-day hike on Wednesday 15 May.
The concept grew out of a concern for the threat of ghost fishing by snagged recreational fishing tackle posed at Gericke’s Point, west of Sedgefield. Ghost fishing is the indiscriminate capture and killing of fish and marine life by lost fishing gear. Most commonly studies are done for industrial fishing which show that ghost fishing has a devastating impact on marine life.
“When we started cleaning up fishing debris at Gericke’s Point we had no idea that we would find evidence of ghost fishing caused by lost recreational fishing tackle”, said Mark Dixon, Strandloper project leader, “but we did and recorded no less than five species killed by this means”.
Interested in finding out the extent of the threat posed by lost fishing gear in the Garden Route a simple proposal to hike the coastline for 10 days and survey various fishing sites was made. In the past six months the hike has evolved into an expedition in which the team will survey fishing sites and plastic pollution along the way.
The first challenge in planning the expedition was deciding on which section of coastline to survey. With such rich archaeological history of Strandlopers in the Garden Route, dating back for the past 164,000 years and, the profusion of fossil trackways, they chose to hike from Blombos Nature Reserve (the site of the oldest artwork attributed to modern Homo sapiens – dated at approximately 73,000 years old) to Wilderness.
While the hike of 175km will be difficult on its own, most of the route is along the boundaries of private properties and nature reserves. Team member Chris Leggatt has worked tirelessly to secure permissions to cross these properties. This in itself has transformed the nature of the hike. “What was originally going to be a camping hike has morphed into a hike with accommodation along the way as supportive landowners and interested people have offered us their homes and venues for our team to sleep over every night,” said Dixon.
Pivotal to the expedition is the accurate recording of data. Dr Louw Classens from the Knysna Basin Project has designed their sampling methodology and Mark Dixon has developed an app using CyberTracker to capture, map and record GPS positions of each item accurately.
On the 14th May the team of six conservationists will meet and drive to Stilbaai with a drop off at Blombos the following day to start the hike. They will finish around mid-morning on the 25th May at the Touw River mouth and invite the public to join them from Leentjies Klip for the final section into Wilderness.
Their expedition can be followed on their Facebook page (Strandloper Project), Instagram (@strandloperproject) and Twitter (@Strandloperp) where they will be posting daily updates of their progress.

CEMETERY TO REOPEN
Scroll to top