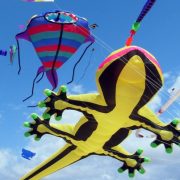 NOW IN ITS 5TH YEAR, THE EDEN KITE FESTIVAL HAS GROWN IN LEAPS AND BOUNDS – AND ALL FOR A GREAT CAUSE

A kite festival is a glorious celebration of health and wellness. Families get out into the fresh air together and look up, rather than down at a screen. The whole community comes out because it includes everybody, not excluding any segment or age. And of course, there is the spectacle of the marvelous creations in the sky.

This December will see the 5th Eden Kite Festival taking place. Our country event has grown, in just five years, to the biggest kite festival in Africa. There will be more kiters than ever before and it takes place over three and a half days!

Sadly, the main event is not in Sedgefield as before, due to the unavailability of a suitable venue. We hope to bring it back home next year while keeping the other two venues as well.

So this year it is in George for a day again, at the Sasol garage on the N2 near Kaaiman’s on Saturday 16th December. Then the whole shebang moves to Knysna for 2 days at the Knysna High school fields on Waterfront Drive on Monday and Tuesday 15th and 16th December.

We have a team of three from Finland this year, the first time that country is represented. Several return visitors are coming back again: Peter “Soutie” Hulcoop from England, Gadis Widiyati of Singapore and Alicja Sjalska of Poland. In fact, Alicja has been to many festivals around Asia and Europe and says Eden is her favourite of all. That’s because of our natural beauty and the friendly, neighbourhood feel of the Garden Route people and the festival. She is bringing partner Szymon with her this year and they will be running kite-making workshops with their great kites made of real ripstop nylon. Gadis will also be running kite-making workshops. Hers was particularly popular when she was last here.

Renowned Indian kite-maker Asghar Bhelim, together with his team of three, will exhibit his hand-painted kites and, for the first time we have a representative from Zimbabwe – the effervescent Suraiya Essof from Kites for Peace Zimbabwe. Last, but most certainly not least, are the kiters from around South Africa, some of whom have been at all five editions of Eden Kite Festival.

As always there’s fun for everyone. Apart from the kite-making workshops – which cater for all ages – there is paintball at George and the ever-popular kite battle on all three days, where teams compete with Japanese fighting kites. This year you can enter on the day, so get your two or three of your family or friends together and join in!

If you have a kite bring it along, otherwise make one or buy one at the festival.

Last year’s Kite Festival raised R58 000 for Masithandane’s Children’s Bursary Fund which assists in the education of local children, particularly those of high-school age as there is no high school or government school transport in Sedgefield.

Although the festival itself isn’t in Sedgefield this year, residents will be given the opportunity of a sneak preview! Get down to Myoli Beach on Friday afternoon 13th (2pm – 6pm) and get a free taste of the main events.