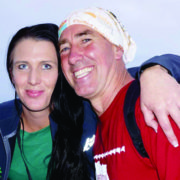 There has been serious concern raised by some Sedgefield residents, especially those associated with the tourism industry, that the future of our local tourism office, and indeed the whole of Knysna and Partners (previously Knysna Tourism) is hanging in the balance. This after it was intimated to staff members last week that, as of the end of June this year, they may well be out of work as the Knysna Municipality would no longer be providing funds.

Knysna and Partners (K&P) is a section 21 company that has for many years had the mandate to market the Greater Knysna area. It is funded for the most part by an annual grant of over R4 million from Knysna Municipality, as well as smaller amounts raised by membership fees and commissions.
The Sedgefield Tourism Office (a branch of Knysna and Partners) will certainly be sorely missed should it close due to lack of funding. Under the enthusiastic management of Belinda Hobson and her small team it has for years played an integral part in not only promoting the village as a holiday destination, but bringing the community together through various projects.
We asked Knysna and Partners Board representative Elmay Bouwer for clarity on whether there was indeed a problem, and she kindly responded on behalf of the board.
“The current Service Level Agreement between K&P and Knysna Municipality will come to an end on 30 June 2017 with no guarantees of an extension, renewal or future grant funding. Due to the current situation the K&P board took a resolution not to commit to renewing contracts for staff appointed on a yearly basis and relevant staff have been informed with regards to this.
“Board members have also been in consultation with full time staff members and communicated the following to them:
1. The Board has no sight or confirmation of funding from the Municipality or any other financial investor at this stage.
2. Whilst they are trying to secure confirmation of future commitments, they are obliged to inform the staff that they (The Board) face this dynamic of no funding beyond 30 June 2017.
3. The board has taken a pro-active approach to appoint a transition committee with a mandate to come up with a new strategic vision, workable plan and budget for the future and this will be presented to the municipality.
4. The board is in the process of setting up a meeting with the Municipal Manager (according to SLA agreement Reporting & Monitoring should happen with the Municipal Manager) to discuss exactly what it is the municipality expects from K&P, and what their vision is going forward.
5. The Board has stated that, should another entity need to be formed, the current staff will have the opportunity to apply for vacancies that may arise within such entity.”
The EDGE also contacted the Knysna Municipality for comment regarding the possible closure of K&P due to the cancelled funding, and though acting Municipal Manager Johnny Douglas confirmed that the matter was under discussion, it seems that tourism staff and other parties will only get confirmation one way or another in three months’ time.
“The matter pertaining to the future funding of the Knysna tourism entity, Knysna &Partners has been discussed in previous Council meetings,” he said. “Funding of whichever nature will be decided by Council as part of our formal Medium Term Revenue Expenditure Framework Process. This will happen at the end of May, as per legislated time frames. An item regarding KM’s approach to “local Tourism” delivery is due to be submitted for the next section 80 meeting.”
Meanwhile Bouwer urged members to attend the Knysna and Partners AGM set for Thursday, 17h30, 23 Feb 2017 at Villa Castollini. The initial AGM held one week earlier had to be cancelled due to a quorum not being present.
“There is very pertinent information to be relayed so it is important for all our members to attend,” she said.