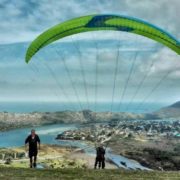 As many Sedgefielders will undoubtedly have noticed over last weekend – the paragliders are once again filling our skies with colour. This after Sedgeview, the launch-site also known as ‘Cloud 9’ was reopened to the gliders and indeed the public on Saturday 10 November.

But the opening does come with certain stipulations and an overall rider that all users understand that the site is privately owned, and thus to be treated with respect, obeying all the rules and regulations that have been put in place.

The site was closed on 1 September by the owner Michael Rohwer, who at the time said that certain stipulations had not been met with regards the efficient management of the site. Since then he has sat around the table with members of the paragliding fraternity to find a way forward.

According to Jorg Bueble, a paragliding school owner who represented the flyers in the discussions, the land-owner’s chief concerns were the general management of the site, the question of liability for both paragliders and spectators, insurance, safety on the site and fire risk.

In order to shoulder much of this responsibility, the Eden Flyers’ Club has been formed to lease the land and maintain the upkeep of the site. Bueble believes that with the co-operation of the public, things should now run smoothly.

“Sometimes, if things taken for granted are taken away, they return in the light of more appreciation. To be able to enjoy access to Sedgeview without limitations in the future, there has to be a few duties and responsibilities attached to any and all visitors to the site,” he said.

The fact that Sedgeview is not a fenced or gated property does, however, make it difficult for the club to enforce the rules set by the owners 24/7, as the public has free access. This is where the paragliding club is asking for members of the public to not only abide by the site rules themselves, but also to advise others who might inadvertently be breaking them.
“It cannot be stressed enough that it is every single person’s responsibility to tap the person next to him on the shoulder, and point out if rules are being breached,” he said. “While the paragliding pilots and their visitors will make sure that the requests will be followed while paragliding activity is taking place, on a day where there is no flying, this part needs to be taken over by the non-flying public visiting the premises. In other words, a joint effort of all Sedgeview visitors.”

He went on to say that the rules are mainly common sense and would be considered common courtesy in any public place.
“There is absolutely no smoking or open fire of any kind permitted on site,” he explained. This includes any form of braais – even gas skottels, and is especially important now with the recent devastating fires in our area.

Bueble also touched on the problem of litter, saying that though there are bins provided, visitors should remember that these receptacles are not large enough to hold masses of rubbish. So should anyone visit Sedgeview for a picnic, they should rather take their refuse home with them instead of cramming it into the bins.
“And please, if you find litter on the ground, help us by picking it up,” he suggested.

Another request was that the site definitely not be used as a party venue or a place for excessive alcohol consumption.
“Simply put, please respect this site as private property and treat it this way at all times. Let’s keep this a beautiful place, a reflection of our beautiful town,” he asked. “Sedgeview is a site like no other. A privately owned property that is freely accessible. Something rarely found nowadays. Let’s meet on top, watch the paragliders take off and enjoy the view while the sun sets. We can work together to keep this a gem to visit, for us locals and our visitors.”

He said there will be a signboard erected at Sedgeview with the club’s cell number so that any problems may be reported directly to them.

You can find more info at www.sedgeview.co.za

JOB LOSSES AFTER FIRE TO HAVE HUGE IMPACT
Scroll to top