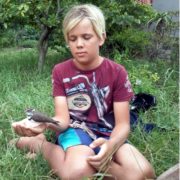 On 8 February 2019, residents of Rondevlei reported a serious situation involving the local water birds. Two young brothers Che and Jem (surname withheld at mother’s request) who live in close proximity to the water were bringing home dead and ailing birds which they had found on the edge of the freshwater lake close to their home.
Over the course of the next five days, the boys found two plovers, three black-winged stilts, a spoonbill, a red-knobbed coot, two spur-winged geese, an Egyptian goose, a juvenile red-knobbed coot and a kiewiet amongst other affected birds. The intrepid young nature lovers nursed the sick birds to the best of their ability, making sure that they were fed and hydrated. While they managed to save some of their charges, there were some that didn’t make it.
The incident was immediately reported to SANParks and rangers responded accordingly to investigate. According to SANParks, they collected 10 dead birds at the beginning of February and another four since then. Marine Ranger Jonathan Britton says that SANParks is aware of the situation and will monitor it by taking regular water samples to investigate and get to the bottom of this phenomenon. He said that though an unexplained death of even one bird is one too many, the number of birds that have been found is not enough to cause widespread panic.
The boys taking care of the birds are very much in tune with their natural environment and have taken a personal interest in rescuing as many birds as possible. After she had consulted with local marine biologists and ornithologists, their mother said that the consensus on the cause of this event is Avian Botulism, a serious neuromuscular illness of birds caused by a toxin. SANParks have concurred with this theory, though they are still running tests for final confirmation.
Says Britton “Over the last four years Avian Botulism related mortalities have been confined to Rondevlei and Langvlei and have not been observed in Swartvlei or the Touw River. This is mostly during summer, and is the result of a neurotoxin produced by Clostridium bacteria which occurs naturally and is widespread in wetland sediments, locally and internationally.
“Last year we also observed some mortalities as a result of Avian Influenza.
“Avian Botulism is not a threat to humans unless the dead birds are eaten raw. Strangely enough, this same toxin (from clostridium bacteria) is used cosmetically in Botox treatments.”
“It is important to note that some birds that may appear to be ill because they are struggling to fly away are often just moulting. It takes a trained eye to recognise the symptoms of Avian Botulism, which includes paralysis of voluntary muscles and inability to hold head erect and sustain flight.
“Signs of Avian Influenza include: Neurological signs (head tilting, twitching, incoordination), corneal opacity (eyes appear white/milky) and lethargic/comatose behaviour.
“We are grateful that the National Park has caring residents and neighbours who reported this incident, and for the caring nature of our young Rondevlei residents.
“It is important to report concerns to us before intervening so that we can confirm any of the above symptoms (or any other symptoms that don’t appear normal). This will help to avoid the unnecessary removal of birds that may only be moulting from the RAMSAR wetlands, and reduce our levels of interference in any other natural ecological processes in this important bird habitat.
“On a weekly basis Rangers patrol all the lakes and collect bird carcasses if there are any and then destroy the carcasses by burning them. All records are kept on a database by our Scientific Services Department and we keep in contact with the State Vet and other relevant State Agencies on the topic.
“Reports were also noted about road verges along the Lakes being sprayed with herbicide, we have initiated discussions with the relevant departments to review this road maintenance practice around the Lakes.
Langvlei, Rondevlei and Eilandvlei are part of a RAMSAR Convention site. In other words, a wetland of global significance as declared by UNESCO.
The contact number for SANParks is 044 877 0046.

THE BURNING QUESTION OF LAND
Scroll to top