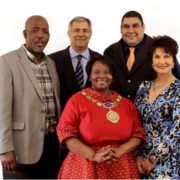 With a coalition agreement with Ward 4 Independent Councillor Velile Waxa, the Democratic Alliance (DA) has once again secured control of the Greater Knysna Municipality. This was made public at the inaugural Council Meeting held at Council Chambers on Monday 15 August.

Good news for Sedgefield is that both the village’s ward Councillors – Levael Davis (Ward 1) and Cathy Weideman (Ward 2) have been elected for the 5 strong Mayoral Committee (MAYCO) – Davies holding the Technical Services portfolio and Weideman that of Community Services. Serving with them on the committee will be Executive Mayor – Eleanore Bouw-Spies,  Deputy Executive Mayor and Chairperson of Finance, Governance & Economic Development Peter Myers, and  Velile Waxa who will hold the Planning & Integrated Human Settlements portfolio.

During the recent Local Government Elections the DA won six out of the 11 wards situated within Greater Knysna. The final official results from the Independent Electoral Commission (IEC) gave the DA 10 out of the 21 available seats in Council. Cope received one, as did the ACDP and the Knysna Unity Congress and the last remaining seat went to Independent Councillor Waxa.

After several meetings the DA entered into the coalition agreement with stalwart Waxa – resulting in the DA now officially being the party that will govern Knysna for the next five years.

At the first council meeting the newly elected Knysna Executive Mayor, Eleanore Bouw-Spies said that they will now put their much published manifesto to work in governing Knysna on the following five pillars: the opportunity town; the safe town; the caring town; the inclusive town; and the well-run town.

“We already have an approved budget in place to ensure that we can fulfill all we promised within our Election Campaign Manifesto,” said Mayor Bouw-Spies

She further gave the undertaking that the DA will continue to work hard to foster growth and delivery within Greater Knysna. “We will now continue our work towards a better future for all residents by delivering excellent services and achieving reconciliation through redress.”

Bouw-Spies says that public participation is something that she is passionate about. To her the effective handling of community queries and communication is of utmost importance. “The public participation and communications departments should sit side by side. Ward committee meetings should be attended by both. If matters are reported, discussed or decided on, there should be a communication strategy in place to ensure implementation is reported on and questions that arise get addressed. This is crucial and close to my heart.”

According to Bouw-Spies the DA council also undertakes to stop corruption by increasing resident’s awareness of their anti-corruption hotline and anti-fraud policy. The DA has already taken steps to tighten up their Supply Chain Policy to comply fully with the relevant legislation.

The new Speaker of Council is Georlene Wolmarans.

The Municipal Council of the Greater Knysna consists of :

In closing Bouw-Spies welcomed all to council and said that she is excited about the upcoming five years. “I welcome our opposition and look forward to vigorous debates. We are not scared of the opposition and know that through them Greater Knysna will experience a completely transparent Local Government, one that bides by legislature and one that is free of corruption.”