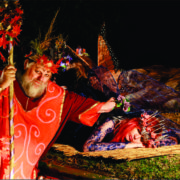 The Sedge Players have certainly pulled out all the creative stops for their production of Shakespeare’s comedy “Midsummer Night’s Dream”, opening this Thursday.
Hearing it was to be performed in the open air on the other side of the railway line in front of Sedgefield Station, I foolishly wondered if such a setting would work.
It not only works – it is absolutely perfect! The play itself is set in a rather enchanted wooded area, and certainly no indoor stage could have provided such an ethereal beauty as this spot.
Clever use of lighting adds to the experience and quickly whisks the audience away to the deep forests of Shakespeare’s time.
The 23 strong cast is equally delightful, and brimming with new-found talent. From the mischievous Puck, to the confused lovers, to the Faery King and Queen. There’s even a band of dodgy travelling performers thrown in!
The play has been cunningly crafted into a shorter version by Stage Manager Jules Reid, and in the hands of Director Melanie Baumeister and her Assistant Emma Rorke, it really has been moulded into something very special.
Opening night is already sold out, but there are a few tickets left for other four performances. If you are in anyway a fan of the arts – please don’t miss out – get down to Deo Gratia and make sure you get to see this show.