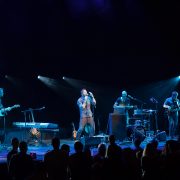 Masithandane has managed to secure the multi-platinum, award-winning band WATERSHED for Sedgefield on New Year’s Eve!

This as a fundraiser for the NPO.

Watershed, one of the most successful and well-loved bands ever to come out of South Africa, will be celebrating 20 years in 2020.

The multi-platinum selling band has released six studio albums during their 20 year career, along with a ‘Greatest Hits’ album. They have received two SAMA awards for Best Pop Album and a SAMA nomination for Best Adult Contemporary Album in 2019. They are also multiple winners of SA’s Best Band award by People Magazine.

Watershed’s enduring popularity began with songs such as Indigo Girl, Fine Way and Letters; but these are likely to be surpassed by their newest release. Written from the light and safe space of life in Kalk Bay, Watershed’s latest album is called Harbour. In it singer/writer Craig has captured stories that we all live with daily.
“It’s a beautiful life here. It’s really important to move on from the negativity we are faced with every day,” he says.

The band will feature Craig Hinds on vocals, keyboards, and guitar, Howie Combrink on drums and guitar, Gideon Botes on electric guitar and Quintin Askes on bass. The evening will include up-tempo songs with the sounds of mandolins, banjos, violins and ukuleles, with lyrics inspired by the ocean and mountain vistas of the False Bay coast.

Watershed may be well-loved locally and faithfully supported at music events and gigs, but they have met equal success overseas. They have toured Europe, performing alongside some of the biggest names in the music world, including U2, Peter Gabriel, Bob Geldof, The Corrs and The Cranberries.

Music-lovers who are keen to experience the incredible energy and signature sound that is Watershed on 31 December 2019 should book soon to avoid disappointment. They will be performing in the Octopus Garden Under the Sea from 21:00 to 23:00 to celebrate the year that was! Then DJs Gary and Laki of Mobi Dique will rock you into 2020 with music from the ’60s, ’70s and ’80s!

ARREST MADE FOR SENSELESS MURDER
Scroll to top