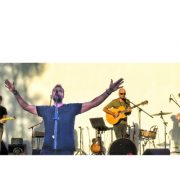 On Thursday 21 March Sedgefield rocked indeed when the hugely popular musicians of ‘Watershed’ took to the stage in the ‘Octopus Garden’ at Scarab Village.
Dubbed as South Africa’s Top Acoustic Rock Band, Watershed’s four musicians were in the Cape promoting their latest album Harbour and, after striking a deal with Masithandane to perform as a fundraiser for the NPO, made Sedgefield one of their stops along the way.
The group wowed the local audience as lead vocalist Craig Hinds, along with band members Howie Combrink, Gideon Botes and Paul McIver, skilfully belted out their latest hits, including Mountainside, Shoulder to Cry On, and I’ll See You Again. This, intermingled with a grand selection of their older numbers, had locals on their feet singing along, clapping and dancing.
Watershed has had a stream of hits since 2000 when their debut album In the Meantime, which included hit single Indigo Girl, took the country by storm. Since then they have rocked homes, radio waves and dance floors nationally and internationally with other hits including the ever-popular Watch the Rain and The River Song.
Masithandane would like to thank all the locals and ‘not so local’
visitors for coming out so enthusiastically to support the NPO’s fundraiser with Watershed.
“From all the wonderful feedback received it was a great success. Not only was it a beautiful evening with fabulous music, but the event raised R11 515 for the Hug Care and Respite Centre,” said Board Chairperson Jacky Weaver.
“We also very much appreciated the sponsorship in-kind received from local businesses, providing the marketing, accommodation, hospitality and set up for the event.
“Our thanks go to Andre Knoetze and Jean Wright, Scarab Village; Juan Olivier and Greg Pitsillides of Sedgefield Radio; Jurgens and Karen van der Walt of Sedgefield Info Centre; Cathy Birkett for Sedge Accommodation; Rob Morrison of ENGEN One Stop, Isabel Petzer of Sedgefield Arms and Bomber Webb of The EDGE Newspaper.
“The best news yet is that Watershed also enjoyed themselves and would like to come back soon!”

GET YOUR ORANGE ON FOR SEDGEFIELD SLOW FESTIVAL
Scroll to top