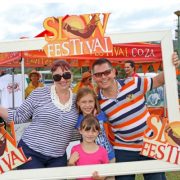 There is a definite excited buzz about the 2020 Sedgefield Slow Festival going on behind the scenes, with the organising committee pulling out all the stops for a bigger and better fest yet!

Many will have realised that the Festival weekend (27 – 29 March) is not taking place over Easter this year. This was always part of the long-term plan to move the Slow Festival to a different time in the school holidays once it had gathered momentum, so that visitors would be encouraged to come to Sedgefield on what would otherwise not be a busy weekend. The change also prevents Slow Festival events overlapping with parts of the Christian Easter calendar that many hold dear.

The great news for this year is that the ‘hub’ of the Slow Fest is back on the Village Green – which is central and easily accessible to the whole community. With stall-holders already eagerly signing up, plus many events – old favourites and new, it is hoped that the Green (or should that be Orange?) will be an overflowing hive of family activity, relaxation, and generally having a good old Sedgefield time.

Says the Festival’s Social Media whip-cracker Jan Gibson “Starting with the opening night party on 27th, a full Programme on the 28th then the parade, prize-giving and after-party on 29th it really is going to be non-stop fun!”

As last year, the Sedgefield Lions are co-ordinating the festival, with Wendy Ruscoe captaining the ship, and Natalie Etridge in charge of events, Shelley van Eeden handling the stalls on the green and Vonnie Veldtman dealing with the famous Slow Festival Parade.

Talking of ships – The EDGE is once again organising the infamous ‘Anything That Floats’ Competition, and calling for the daring boat-builders, cunning craft constructors and slippery sub-sinkers to sign up for another hilarious day of flying, floating and falling apart chaos.
“This year spectators will be able to take part in voting for their favourite boats to win the overall prize,” says organiser Bomber Webb.

As is tradition, local businesses are encouraged to start collecting their orange paraphernalia so that they can ‘Get Their Orange On’ in the days leading up to the Slow Festival. This goes a long way to promote the festival to folks driving through, and builds excitement and community spirit for the locals. More details of the ‘Get Your Orange On’ competition in future editions.

ALL EYES ON KNYSNA MUNICIPALITY
Scroll to top