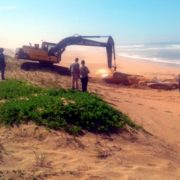 The body of the Bryde’s whale that washed up onto the beach last Friday (09th February 2018) was buried today in Kleinkranz, Wilderness.

It is believed that the adult male whale died out at sea, the cause of death probably being old age as there were no visible injuries anywhere on its body. SANParks took the decision to bury the carcass subsequent to a recent stakeholder planning workshop on Marine Mammals held last week. Marine Ranger for Wilderness, Jonathan Britton explains the complexity of the disposal of a dead whale that has beached so close to a residential area.”Normally we would prefer to leave it to decompose naturally, as the carcass of a whale can provide important nutrients to micro-invertebrates and birds,” he said, “But its close proximity to a residential area makes the whale a bit of a ‘public nuisance’ – mainly because of the smell. Towing it out to sea was also not an option as the floating carcass would be a hazard to boats and ships.  Thus we made the decision to bury the whale on the dune behind the high water line where it can decompose without seepage of rotting flesh into the sea attracting predators such as sharks.”

Britton and Carel van der Merwe, another Marine Ranger for Wilderness, were on the scene to oversee the burying process.Also known as the Tropical Whale or Eden’s Whale, the Bryde’s Whale resembles a number of other whale species’ outward appearance, which often leads to misidentification. They reach a length of between 11.5 and 14.5 m and can weigh between 12 and 20 tons. What makes this whale identifiable to those with a keen eye is the three ridges that run longitudinally and parallel to one another along the top of the whale’s head. These are at the same level as the two blowholes. Because it is a baleen whale, the Bryde’s Whale needs to expand its mouth when swallowing large amounts of water. For this, it has grooves along the lower jaw, which allow it to concertina open and closed more effectively.  This whale is dark grey or black, with white markings on its throat and chin.