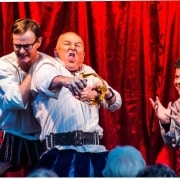 Our small but rather proud troupe of Sedge Players is on its way to perform at the National Arts Festival in Makhanda (formerly Grahamstown).

Who would have thought that the rather tongue-in-cheek Complete Works of William Shakespeare (Abridged), put together by this tiny bunch of local yokels over three years ago, would be so well accepted locally, and indeed regionally, and end up ‘on the boards’ of the Victoria Theatre at this nationally acclaimed arts festival?
This show (which some audience members say would make The Bard turn in his grave whilst others swear they can hear his soul chuckling) saw its inception in the lowly Studio 42 theatre as the players kicked off in October 2018 with a read through and then lots of practice. Throughout 2019 the show was touring and went from strength to strength all over the Garden Route. Two shows in George, nine in Sedgefield, two in Knysna and four more in Plettenberg Bay put them at almost 20 shows before theatres all over the globe were shut down due to the Coronavirus pandemic.
But as things started to wake up and open up in the first half of this year, the cast began rehearsing up a storm on a gloriously updated and adapted script (A New Variant!). With costumes and props thoroughly and oh-so-beautifully upgraded by The Costume Mistress (Linda Ormond of TwinX), actors Nita Allsopp (from local nurse to Comedienne Extraordinaire), Gareth Pretorius, (bee-keeper, stable hand and now a celebrated Actor of Note) and Bomber Webb (relatively unknown and now stepping out of obscurity to squint into the limelight) got ready to go again. Their mission is best described with a line from the script ‘Ladies and Gentlemen, we shall do it again… BETTER!’
The troupe insisted on reworking the lines (Producer/Director Melanie Baumeister swears they never learnt them in the first place anyway), threading an adaptation of Queen’s ‘Bohemian Rhapsody’ (it is her majesty’s Jubilee year, after all) all the way through. Once it was deemed a workable show (just as the nation was scheduled to head into its 5th wave of the current pandemic), two outdoor performances of ‘The Complete Works of William Shakespeare, Abridged (A New Variant)’ were scheduled at the Mosaic Market. The deck of Andy B’s Art Gallery was transformed into a theatre with all the accoutrements, from lights and sounds to backdrops and wings. With even a makeshift Green Room, the loyal, kind, and always forgiving local audience was given a preview performance of the show (unfortunately, the second had to be postponed due to bad weather). It was another Sedgefield first. The venue hosted close to 100 audience members, and TCWOWSA was performed pretty much ‘under the stars’. The house literally came down (the backdrop dismantled itself) in the second act as the three ‘highly trained profiteroles’ attempted Hamlet at various levels of acceleration. Never knowing what was scripted and what was just plain having fun, the audience rolled in their seats with tears of laughter, holding their bellies and rubbing their cheeks. How we survived not being this entertained for this long is anyone’s guess.
The National Arts Festival will see the Sedge Players performing five shows over five days between 27 June and 3 July, and this merry band says they cannot wait to bring the mirth to further-flung audiences from all over the country. Tickets are becoming increasingly scarce as this show has been known to be ‘Sold Out’ well in advance at each of their previous venues. Radio Algoa even saw fit to report on their wild and crazy antics portraying all of Shakespeare’s 38 plays and 137 sonnets in a brisk 90 minutes.
‘Break A Leg’ Sedge Players, have a ball out there and bring back the stories of the glories of life under the lights!