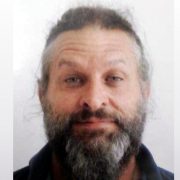 Tuesday 30 April saw the resumption of Sean Kelly’s murder trial at Knysna Magistrates’ Court. This after the case against him was postponed on 29 March. Once again, he only stood before the judge for a few minutes before the case was postponed – this time to 16 May.
Kelly (50) is charged with the murder of Sedgefield resident Noreen Hampson on 2 February this year. He later admitted to this crime at his bail hearing though he claimed then that his actions were not pre-meditated.
Kelly was brought into the dock a few minutes after 10am, and the judge asked if he was still conducting his own defense, which the accused man confirmed he was. After brief input from the state prosecutor, the judge announced that the case would be postponed, asking Kelly if this was an acceptable course of action. Kelly said it was fine with him, then asked if he could make a statement. The Judge agreed and Kelly went on to tell the court that he had had consultation with a psychiatrist in George – Dr Swanepoel from George Correctional services – who had recommended that he go to Valkenberg, the State’s psychiatric hospital, for mental evaluation.
The judge then asked Kelly to give details of the psychiatrist who had examined him to the prosecution in order that this matter be given further consideration. He then officially declared the matter postponed until 16 May.
Meanwhile, there have been reports of Kelly’s house on Marigold Street being broken into and ransacked on a number of occasions, so the Neighbourhood Watch Groups and SAPS will be monitoring the property closely.