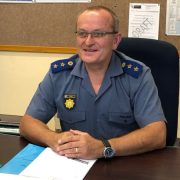 Picture:  Knysna Station Commander Colonel De Wet is in the hot seat – As the community battles with habitual criminals, could he be the solution we have been waiting for?

The new SAPS Knysna Station Commander Colonel Francois De Wet, who took up the position on the 1st of March this year, cuts a dynamic figure and seems determined to make a difference in his new hometown. Whilst ‘the proof of the pudding is in the eating’, there are hopes that he might be the leader to take the local force to a higher level of service.
An invitation to local media to meet the commander felt like a step in the right direction, as did the Colonel’s no-nonsense attitude towards the challenges on his plate. He first promised to work alongside all existing structures – both formal and voluntary.
“It is imperative that SAPS works with the community, and interacting with local structures is key to this,” he reasoned. He then spoke about the prime importance of having an ear to the ground so that potential conflict can be avoided with early dialogue.
Colonel De Wet left no doubt as to his long-term mission – to put SAPS in its rightful place as the leading agency in the battle against crime in Greater Knysna. Initiating a more coordinated use of resources for the six sectors under his command, along with an all-round ethos of transparency in SAPS should go a long way towards this, he said.
Sedgefield’s volunteer crime-fighting groups have already engaged with the Colonel through the Community Police Forum, and Sedgefield representative Mike Hofhuis felt encouraged by the positive exchange. Indeed, though Sedgefield is currently experiencing break-ins on an almost nightly basis, he believes locals should not lose hope.
“The Community Police Forum addressed several pertinent issues relating to Sector 6 – Sedgefield and Smutsville – with Colonel De Wet,” Hofhuis told us, “We strongly believe that he will address these issues and, furthermore, we ask residents to please be patient a while longer so that the Colonel can address our concerns along with those of other Greater Knysna Sectors. As the saying goes, Rome was not built in a day.”
At the media meeting, when the Colonel was asked about the level of service delivery of the Knysna police force, he said that it is an all-important factor, and he would like to empower members of the public to point out instances where they feel SAPS has dropped the ball. To this end urgent service delivery issues may be reported to the shift commander on duty on 082 379 3411 – even if it is after hours. Normal crime reports, however, should be reported using the normal contact number of 044 302 6677.
When questioned about the ongoing frustration of perpetrators being arrested, taken into custody, and then released back into the community only days later, De Wet admitted that there are challenges regarding the follow-through of arrests. He will be engaging with the Justice Department to find a positive solution, and once this has been finalised the two offices will issue a joint statement.
Regarding the all-too-regular N2 protests, one of which landed on the Colonel’s plate within three days of his starting at Knysna, he said the experience he had gained in other towns had been that a hands-on, preventative approach often stopped such unrest from escalating.
“Community engagement is key and we would like to set up a mediation team to be more proactive in dealing with protest action that affects our service to the community,” he said.
Colonel De Wet warned that on his quest for effective policing in Knysna he might sometimes lock heads when initiating moves others might not be comfortable with.
“Sometimes we have to make unpopular decisions – that’s part of the job,” he smiled.
The 55-year-old Colonel does have an impressive CV. He originally joined SAPS on 26 June 1986, attending his basic training at the Pretoria Police Training Academy before his placement in Cape Town. Later, during his career in police management, he was deployed at various police stations in the Overberg. While holding the rank of Lieutenant Colonel he acted as Station Commander for Hermanus and Kleinmond where he gained experience in working with external role players. During 2016 he was transferred to the Visible Policing Component at the Overberg Cluster where he worked until his recent promotion to the rank of Colonel at the Knysna SAPS.
As well as attending numerous internal courses within the police service during these three and a half decades, he has also studied for and passed a National Diploma in police administration and a Baccalaureus Technologiae: Policing.
Married with two sons, the Station Commander is happy that his family has relocated with him to Knysna.

WHO IS VETTING OUR TOP BRASS?
Scroll to top