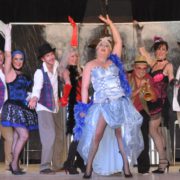 Once again local residents, businesses and charity organisations have pulled out all the stops in support of the Sedgefield Melodrama, and if the response of the audiences thus far has been anything to go by, this year’s Once Upon a Night has met everyone’s high expectations and more.
The enthusiasm of cast and crew is what drives the show, and the laughter, cheering and calls for more from those who have gladly bought tickets to attend each performance lifts it even higher. The result is great fun on all sides and huge amounts of money made for local charities.
With many stalwarts, from Melodramas gone by, back on the planks alongside all the new (yet somehow still familiar) faces, the ‘smorgasbord’ of locals involved is what makes the show so special. Without wanting to ruin the surprise (there are still two shows left), those who attend may (or may not) recognise local teachers, hairdressers, doctors, restaurateurs, horticulturalists, coffee-shop proprietors, all dressed up a storm and all doing their very best to make fools of themselves for charity.
Says Director Bev Fowler “It has lots of variety, lots of fun and laughter. It really is an awesome show!”, whilst her able Assistant Director, Margie van Rensburg is already looking forward to next year’s Melodrama. “Each year we try to top the previous year. I envision much hilarity, fantastic music and record-breaking fundraising for our beneficiaries.”
With a total of over R500 000 made in the last eight Melodrama productions, producer Leigh-Ann Ralph is convinced that the 2017 effort will add a hefty sum onto that figure.
“It’s early days but with the fantastic turn out and generosity of the fabulous audiences and businesses, we should make close to R140 000.00 this year!” she said, adding “I can’t thank Bev, Margie, and the cast and crew enough for all their hard work.”
Major beneficiaries of the Melodrama are Laerskool Sedgefield, the Sedgefield Lions and the NSRI. “But hopefully after the last two shows we will have enough to add names of other charities to that list,” says Leigh-Ann.
At time of going to press about 850 tickets had been sold, and only a few seats were left for the night of Thursday 7 Sept. The last night (Friday) is already sold out. “If people don’t want to miss out they should book at Tourism before all the tickets are gone,” the proud producer urges.
A message from an overseas visitor who caught the Melodrama sums it up perfectly. “For a small community to put on a quality show like that as a charity event is unique and unprecedented anywhere in the world. You should be proud of what you are doing.”