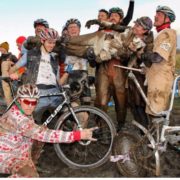 Much to the joy of local mountain bikers, it has been announced that this year’s SA Single Speed Champs will be held just up the road at the Eden Trail Park in Barrington on Saturday 29 September, with all proceeds of the race going to our local NSRI. Known for the wild and somewhat eccentric entries this sport attracts, it is bound to be a spectacular spectator treat too!

If you like the idea of a fancy-dress party with beers in the forest, the end of this month will see a rather unique cycling event hosted at the renowned Garden Route Trail park, in Barrington.

The happening in question is South Africa’s 2018 Single Speed Championship and it’s everything that most contemporary mountain biking is not. Single speed mountain bikers are the counterculture of off-road cycling and although their choice of riding with only one gear (which is inevitably always the incorrect one) appears to be masochistic, it is, in fact, an act of purity. If you make the decision to ride a bike with only one cog, the implication is that you’ll never be in the correct gear and that unshackles your entire riding experience from any pretense of overly serious expectations.

This September’s single speed champs is the local chapter of a worldwide movement which started in 1995 and attempts to keep alive that original sense of carefreeness so fundamental of mountain biking in its infancy. Single speed mountain bikers don’t worry much about how they finish the route, it’s the journey which counts.

At the Trail Park event there will be a winner, but the podium is very different from what you would expect. The winner is rewarded for their achievement by consensus of general recognition, but everyone else who finished gets joint second place. It’s a typical example of the egalitarianism so inherent to single speed riding.

Each year’s Single Speed championship has a dedicated theme and one is expected to dress accordingly. For the 2018 event it will be ‘every village needs an idiot’ and whereas more conventional mountain bike racers might obsess about specific lightweight components, Single Speed riders are consumed with detail about their outfits, and the more ridiculous, the better.

Organisers also make a special effort to ensure race day is as difficult as possible. Single Speed races are renowned for their preposterous race briefings, which are purposefully elaborate without imparting any information of value concerning the actual race.

When the world single speed championships happened in Winterton six years ago, the field was extensively briefed in Zulu. Finding your bike at the start can also be problematic, as there is a proud tradition of hiding all bikes whilst the race briefing is conducted. They could be locked away in a barn, for instance.

Hydration is another challenge too and instead of water points there are beer stops, which are mandatory. Where a conventional mountain bike race might have competitors rushing through water stops, single speed riders lounge around and socialise at the race’s beer stops, before swinging a leg back over their top tube again.

To uninformed observers, single speed racing might appear ridiculous, but it is a ludicrous amount of fun for people who love mountain biking a lot more than the sheer competition. If you want to meet some of the most benevolent bike geeks alive, you know where to be on the last weekend of September.

The SA 2018 Singlespeed Champs will be on Saturday 29th September and all proceeds will go to NSRI Wilderness.

We welcome all geared riders to join us for a day of fun and uncompetitive (or competitive) racing. Online entries close on Tuesday the 24th of September. There are various entry options available and all online entries include a free event shirt.
https://www.entryninja.com/events/event/27721-sassc2018
Ben Olivier ben@skoi.co.za
Phone 082 821 2741

A CAR CRUSH OF NOTE
Scroll to top