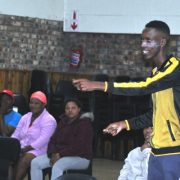 At a public meeting held on Monday 25 November at the Smutsville Community Hall, many residents vented their frustrations regarding the continuous problem of crime in their community. Whilst the members of SAPS and Knysna CPF who were present tried their utmost to give answers to all the questions raised, it was soon evident that due to lack of resources, no instant-fix would be forthcoming from SAPS, and a far more trusting relationship between SAPS and local residents would be necessary to have any sort of impact on crime.
The meeting had been called by the community, who presented a list of problems for SAPS to consider. These included SAPS only having one van in Sedgefield, complaints of finding the police station ‘closed’ at night, criminals with open cases against them still being on the street, and the need for SAPS visibility, especially over weekends.
The last point on the agenda put the community concerns in a nutshell.
“How will the police assist us in getting our town back from drugs and crime?”
To SAPS credit, they sent the top team to face the questions. Alongside Sector 6 Satellite Station Commander Kapp were Knysna Station Commander Metu, Head of Visible Policing Colonel Gogwana, Detective Branch Commander Colonel Khan, and Knysna CPF Chair Cheryl Brits. Sedgefield’s Community Orientated Policing (COP) was represented by Michael Simon.
Colonel Gogwana fielded most of the questions, as one by one community members stood to talk about the very bleak crime situation in Smutsville and Sizamile.
“I have to sleep with a knife in my bed in case someone breaks in,” said one woman who is a single parent.
“We feel like the justice system is failing us in Smutsville,” complained another.
Another speaker, a young man who relocated here from the Eastern Cape some time back, said he had never lived in a community as fearful of crime as Smutsville. He said that there is a very real danger of residents taking the law into their own hands. “I feel I am not protected,” he said, “If someone breaks into my home I will do anything to sort him out.”
Shouts of agreement echoed from the floor, and it seemed that a sizeable number of those present felt vigilantism was the only answer.
Gogwana explained that whilst everyone has the right to defend themselves, residents should refrain from going out and looking for criminals. “Then you are taking the law into your own hands,” he warned, “If you do that, then I will have no choice but to prosecute you.”
He called on residents to share information with SAPS, saying that the police will endeavour to raid suspected drug houses, or businesses buying and selling stolen property. He said that it is only with communities working together with SAPS, and joining registered Neighbourhood Watches, that any dent can be made in criminal activity.
When a few from the floor suggested that SAPS members were not doing their jobs effectively, he said the large number of criminals incarcerated in Knysna proved that they were.
“Correctional Services can house 179 prisoners max. Currently there are 370. That is more than double – so it’s not like we are not making arrests,” he said.
Another understandable complaint from local residents was that SAPS members had been bringing suspects around to their accusers homes for identification. This, they said, put them in the very scary position of ‘being identified as the one who had informed’. Gogwana agreed that this was totally wrong, and asked that any instances that suggest inappropriate conduct by any SAPS member be formally reported at a SAPS station, so that he or she can be taken to task.
Warrant Officer Kapp was one of the last to take the microphone – and touched on the subject of the juvenile crime that seems to be pervading the town. He put at least some of the responsibility at the feet of the parents, saying that tackling this issue must start at the home, with the children.
Members of the community agreed, suggesting that with school holidays approaching, activities to keep young people busy were a must.
What started as a potentially explosive meeting eventually brought most people present to agreement:- That SAPS could only be more effective with assistance from the community and the Neighbourhood Watch, that parents had to make every effort to keep young children and teens off the streets at night, and that the police would play their part by initiating higher visibility in the community on a regular basis..