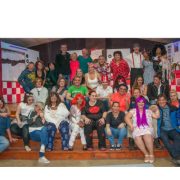 Last night saw the opening night of Sedgefield’s biggest annual entertainment extravaganza, the famous MELODRAMA!
Twenty four cast members, many of them ‘first-timers’, and 12 crew were understandably suffering from serious first-night jitters as they waited for the curtains to rise.
But as soon as the first number began, the butterflies disappeared and the cast Delivered with a capital D! Producer Margie van Rensburg was overwhelmed by the audience’s response.
“They were whooping and cheering, and we were complimented left right and centre,” she enthused. Indeed one couple who had been going to Melodrama for years pulled her aside and admitted that they hadn’t known what to expect from such a new cast and many of the ‘old stalwarts’ not involved.
“But my goodness, you have got absolutely fantastic new talent this year – we enjoyed every single minute of the show!” they told her.
Last year’s Melodrama raised over R160 000 for local charities and the team is aiming high again this year. Tickets for 22, 23, and 29 August are still available – book yours at Fijnbosch Coffee Shop.