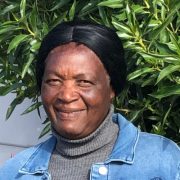 There’s been no vote or even selection process, but The EDGE Team can only stand in awe of the work that Martie Rooi does in the community, so as August is National Women’s Month – we pay tribute to this selfless lady.
Indeed, when we interviewed her on Monday’s National Women’s Day public holiday, Martie mentioned that it had been a busy weekend for her, and she hadn’t been able to get more than an hour’s sleep on Saturday night. When we pushed her for more detail, we learned she had given medical attention to no less than nine stab victims!
Most of what Martie does goes unrecorded because she is the sort of person that just gets on with what needs to be done, without any thought for any accolades for herself. She has been described as Smutsville’s ‘Florence Nightingale’ but could equally be seen as the community’s very own Mother Theresa.
Martie wears many community hats, but the biggest has to be heading up Smutsville’s First Aid Crew, which is run literally on her front stoep. For the last three decades, she has been tending to the wounded, the sick, the aged and even those giving birth, without thought for her own safety, never mind any compensation.
Indeed a few years back, The EDGE reported on an incident in which Martie was tending to a man who had been badly wounded by a group of men who had attacked him in a bar brawl. He had escaped and made his way to Martie’s home, but whilst she was trying to bandage his wounds, his attackers rushed in to try and finish him off.

But this and many other incidents that she has dealt with over the years has not put her off.
“Sometimes I get frustrated, and I say I am going to stop,” she says, “But then the next day people come, and I just start again.” It seems her faith plays a major role in keeping her strength and spirits up, as she glances heavenward, smiles and says, “I have got someone looking out for me!”
When patients arrive at her home, Martie has to decide whether they need more medical attention than she is qualified to give. If they do, then she calls the ambulance from Knysna. Indeed, the paramedics have realised over the years that when Martie calls, it must be something that needs swift attention.
“The ambulance people know me by name,” she laughs, “I have a hotline to them!”
Whilst she worked alone for many years, Martie says she now enjoys the support of other members of the First Aid Crew, including Selina du Plessis, Rachel Harker and a thirteen-year-old boy Eddie Kasanya who has decided to learn everything he can from Martie and is proving to be a great help to her.
She is also very grateful for the ongoing assistance she receives from the community at large – by donating into her very active pharmacy account or dropping off goods at her home.
One would think that her being unofficially ‘on call’ practically every night, Martie’s days would be spent catching up on sleep, but no. Martie has other selfless duties she attends to.
She works as a care-worker for Masithandane, is the community contact person for Fresh Start’s ‘Helping Hands’ – which identifies and assists community members with particular needs – and she also runs her own soup kitchen, mainly for children.
During our interview, it became very evident that this amazing lady holds a special place in the local children’s hearts, with so many coming along, especially to say hello.
Martie laughed, “When we do a street or house clean up, they often come to offer help,” she said, “And if we haven’t done one in a while, they come to me asking, ‘When can we come and clean with you again?’!”
And as if she hasn’t got enough on her plate, Martie is currently looking for over-locking machines to start a new job-creation project – a sewing circle to provide an income for unemployed women.
When asked her age, Martie grinned mischievously, saying it isn’t something everyone needs to know. But she certainly isn’t setting any date for retirement in any form.
She simply said, “I will stop when the Lord says I must stop.”.